“where animal tracks, pressed into mud” published in Prairie Fire, V. 37, No. 3 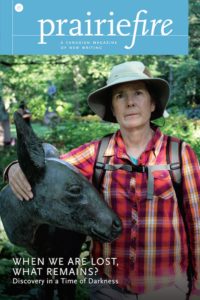 Prairie Fire has given a home to one of my most symmetrical poems in the Fall 2016 issue of the magazine. This short excerpt from then/again is part of a longer suite titled “square.” In this poem, each phrase begins with “where…” and the two stanzas mirror one another–to an extent. The difference is one of specifics: where the first stanza describes a place in general terms,

where animal tracks pressed into mud…

the second stanza names the features of the place:

where the tracks are named wild horse and pasture cow…

The result is a poem-sculpture that both says something and shows something, that uses the act of naming as a marker of meaning-making.

Copies of the issue are available for order from Prairie Fire directly.