Ontario! Quebec! I’m coming to you with then/again this November for a reading tour, making stops in Toronto, Guelph, Montreal & London. Full details are on the homepage, but here are a few highlights..

Cop House by Sam Shelstad is a book I’ve been looking forward to for a long time, and it’s finally coming out! Cop House has been described as “impeccably nutty,” by Bill Gaston, while Gary Barwin, winner of the Stephen Leacock Medal for Humour, compares Shelstad to George Saunders and calls the book “marvelously surprising.” As for me, I’ve been a fan of Sam’s work since the first read, but I’ve been hopelessly hooked since I read his hilarious and true account of an apartment application scam involving a cat and a yellow banana, published as a Facebook status update. Launching his debut short story collection November 4 in Toronto at the Monarch Tavern, Sam will be joined by three other Nightwood authors, myself included.

If I was stranded on a desert island with only one little bookstore, which would I choose? Well, that’s easy, Librairie Drawn & Quarterly. On November 10, we’ll be making our own little desert island of words in this wonderful bookstore. Sam Shelstad and Spencer Gordon are coming from Toronto to join Rachel McCrum and I at the Petite Librairie (new Children’s bookstore and events space across from the original rue Bernard store) for a reading and wine-drinking launch. Rachel McCrum and I first met in Edinburgh in 2013 when I was on tour with “Notes from the Fort.” She lives in la belle province now and has a new book, The First Blast to Awaken Degenerate Women.

I’ll be doing three readings in Toronto over the course of the tour, so there are lots of 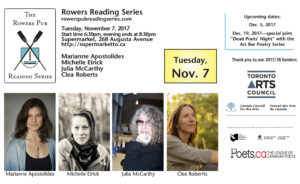 options if you are trying to catch up with me. I’m really looking forward to joining Marianne Apostolides, Julia McCarthy and Clea Roberts at the Rowers Reading Series on November 7. This regular, monthly series happens at Supermarket on Augusta and is short, sweet and to the point! Doors at 6:30, readings from 7-8:30. Join us if you can!

London, London. City on the Thames. But not that Thames, and not that London. This is the little Southwestern Ontario version of the seat of the British empire. London, Ontario, of course. I lived in this lovely city once. Though I only stayed for six months, London succeeded in wooing me with her beautiful trees and parks and brick houses. I’m delighted to return for two events on Wednesday, November 15, first at University of Western Ontario, then at Brown & Dickson bookstore on Richmond. Londoners, it would be a treat to see you there.