It took a few days for the news to cross the country, but the winner is…! 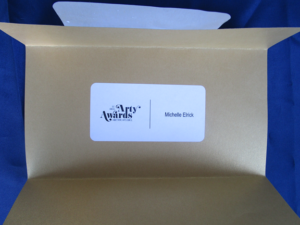 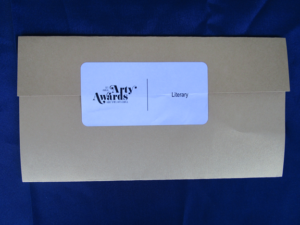 “Thank you Abbotsford Arts Council for the work you do to recognize and support local artists. I am honoured to be a recipient of this award. Thanks also to all the friends, musicians and artist peers who fostered my creativity and provided mentorship, encouragement and inspiration when I lived here. I have seen this community’s drive to make and share art grow over the past 15 years, and I’m proud of the strides my hometown has made toward a vibrant artistic culture. Many thanks to the AAC and others for helping that change along.”

I found out a few weeks ago that I have been nominated for an Arty Award in the category of Literary Arts. The Arty Awards are the Abbotsford Arts Council’s annual celebration of artistic excellence in the Abbotsford community, currently in their 13th year. Full disclosure, I haven’t lived in Abbotsford for a long, long time. When I did live there (1985-2005) I produced almost nothing of artistic excellence. There was one poem I wrote in Abbotsford that I would consider excellent–a piece called “Ditches” which ended up in To Speak. The vulnerable tone, straight-forward storytelling and rich emotion of that piece still surprise me, a hundred of poems later. 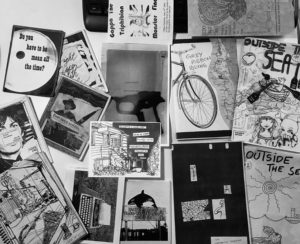 Some zines from Abbotsford circa 2004

Back when I lived there, the art scene in Abbotsford was underground–quite literally–happening in grungy basements and a building slated for demolition that some young visionary proposed become a community art space in the meantime. While the bulldozers got organized, a group of us started making and performing art in this space we called Art Matters. I read poems from my zine Liberated from that stage, opening with the words “Liberate me with a blow, cut my way free / spray these words, this blood, farther than six feet across this room / farther than the bathtub, than the reach of the drain / and the film and secrets it carries out / and down and out. / Liberate me with a flat thud.” It was a dark time. Back then, there was no municipal support, outreach or programming for emerging artists. Yet there was this light growing in the bunch of us young punks and skids and hippies. Many of us wanted to go further, and some of us did. The common path for those who went on to become professional artists led straight out of town.

For me, the path took me to Winnipeg where I found a community that celebrated art and supported artists in their push toward excellence. I found a job in the publishing industry, started attending a poetry open mic, joined the Writer’s Guild, found an inexpensive studio space, wrote a manuscript and found a publisher. Easy. Okay, not easy, but possible. The systems were in place, all I had to do was engage.

Abbotsford is different now. I spent a week there this Spring while on tour with then/again and was delighted to see how much the town has grown artistically. The University of the Fraser Valley has a Artist-in-Residence program, as does the Kariton Art Gallery. An occasional concert series in Jubilee park started by that DIY crowd back in the early 2000s is now a regular, funded, Summer concert series offering an outdoor performance venue for local and touring bands, complete with a beer garden and food vendors. A small, yet impressive new gallery called The Reach was established within the past 10 years, providing high-quality exhibition space for visual artists. The award-winning college radio station, CIVL, which, like the concert series, was started by my peers from the Art Matters days, now broadcasts from a brand new studio in the Student Union Building at UFV. Many of those artists who left to find better opportunities have returned, bringing their experiences and refined tastes back with them. There is a lot to celebrate, considering how far Abbotsford has come in the past 15 years.

Congrats Arty Awards on 13 years of celebrating artists. It’s nice to be on your list of nominees.