Poetry Is Dead has published a very strange poem from then/again in their new issue on the Future. “Lipton” is one of a series of seven prose poems I have written in the style of Italo Calvino’s Invisible Cities. These “Invisible Houses,” as I sometimes call them, each tell the story of a different place I have lived. 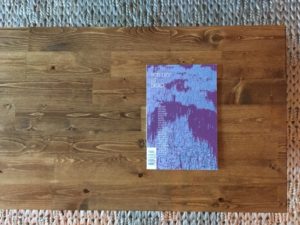 Not directly, clearly or precisely, rather these are whimsical, dream-like, magic-real tellings that replicate the sense of the place rather than the actual place.

As the months in Lipton pass, gills open between the new swimmer’s earlobes and collarbones like the curl of a shedding birch, and a garment of scales weave intricate patterns around the curves of arms and thighs, of breasts and hips and scapulae.

Copies of this fantastic issue are available from Poetry Is Dead directly.