“crow (v.)” was one of five poems shortlisted for this prestigious Canadian prize. Selected from over 1700 submissions, this poem takes its inspiration from observational influence (as described by the “double slit experiment” of quantum mechanics) and the etymology of the word crow. Written as a series of definitions, dialogue snippets and an encounter with a mid-summer elm tree, “crow (v.)” describes a world as unique as one’s particular view–a world that is created in the observer’s gaze. Look for “crow (v.)” in print May 2017, as part of Elrick’s new book, then/again, forthcoming from Nightwood Editions. 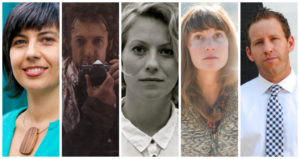 branches dance in a visible way. observer, I.

The full poem, along with the other shortlisted poems, are published on CBC books. Read the full text here.